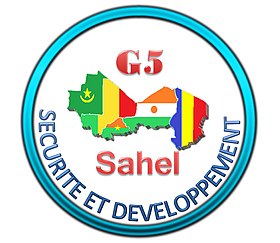 The G5 Sahel, headquartered in Nouakchott, Mauritania, is an intergovernmental cooperation framework between Burkina Faso, Chad, Niger, Mali and Mauritania. Created on 16 February 2014 under the impetus of the Mauritanian presidency of the African Union, the G5 Sahel organization intends both to fight against chronic insecurity in the region and to carry out development actions to develop the zone.

As part of its development mission, and to make security actions in the region sustainable, the G5 Sahel has developed in 2014 a Priority Investment Program (PIP), composed of 40 regional projects mainly covering the Sahel border areas.

In July 2017, France, Germany and the European Union, together with the World Bank, the African Development Bank and the United Nations Development Programme launched the Sahel Alliance, a platform for international cooperation to better intervene in the Sahel. Since its launch, Italy, Spain, the United Kingdom, Luxembourg, the Netherlands, Denmark, the European Investment Bank and Norway have joined the initiative.

With the aim of stabilising and developing the region as a whole, the Sahel Alliance finances and coordinates more than 1,021 projects with the G5 Sahel countries, to address six major development challenges: education and youth employment; agriculture, rural development and food security; energy; governance; decentralisation and basic services; internal security; and four cross-cutting themes: private sector; gender; climate and youth. All of these projects are deployed rapidly, particularly in the most vulnerable areas. The objective of the Sahel Alliance is clear: to have an immediate impact on the population, in accordance with the priorities established by the G5 Sahel countries.

Within the framework of development activities, the Sahel Alliance is working closely with the G5 Sahel Permanent Secretariat to ensure that its project portfolio and the PIP are aligned.